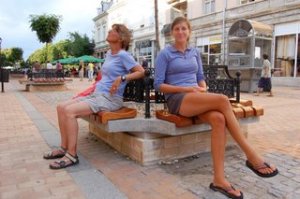 On August 7th, 2006,  my daughter and I returned home from a 2,880 kilometer swim of the Danube River. I swam, she guided me with a kayak. The swim was for social/environmental care-taking and symbolic of the ten countries along the Danube working together to make the swim successful just as we can work internationally to be successful as social/environmental stewards of the earth. The depth of human compassion and kindness we experienced from Donaueschingen, Germany to Sulina, Romania was extraordinary. The support of Rotary International, WWF, the Bulgarian River Police, the Romanian River Police and thousands of individuals along the river was an incredible statement of social and environmental care-taking. The success of the swim is a concrete example of what people can accomplish when we support each other. The most often asked question is, “How did you do it?” My reply is that “I” did not; we did, all of the previously mentioned people and more. Many people left an imprint on my soul that carried me to the Black Sea and will stay with me forever.

There were hundreds of pictures taken of our journey down the Danube River, but one particularly summarizes our relationships with the people along the way. Taken our first morning in Romania, it is of Kelsey and Viorel sitting at a small table outside his home. Twelve hours prior, we did not know him. Now, after an evening of food, conversation and a comfortable night’s sleep on his sofa, we are at his table with a breakfast of warm goat’s milk, homemade goat cheese, eggs from his chickens and Turkish coffee.

Viorel has none of the amenities we possess in the U.S. and other developed countries, but he receives the consequences of global warming and the backlash of other environmental issues. He could have left us to fend for ourselves along the Danube’s muddy, post-flood shores, but he did not. Like the prodigal son, he took us in and generously shared what he had to offer, as shown in the picture. I love this picture because what stands out the most is the laughter. Kelsey knows no Romanian, Viorel no English, but they are laughing. The most marvelous act of laughter, the universal language, is that it heals the body and the soul. This picture reassures me that people really do want a peaceful, healthy planet, regardless of what governments, religious zealots or a small group of greedy business people portray.